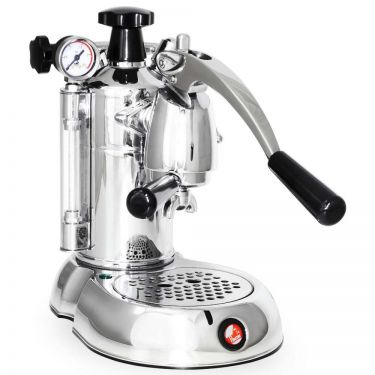 The boiler has a large 32 oz capacity, enough to extract a maximum of 16 delicious espresso coffee shots. A recessed power switch shuts on or off the unit's heating system. After switching the unit on, the water inside will be brought up to operational temperature within a matter of minutes. When you want to start brewing, just raise the metal arm (pulling water into the brew head), and then pull it down (pushing water out and through the ground coffee). There is no electric pump to depend on or maintain. Instead, this machine relies only on the strength of your own arm. A transparent water level bar lets you monitor the amount of water in the boiler without having to open the reservoir. 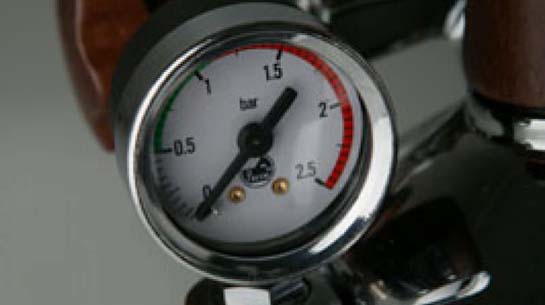 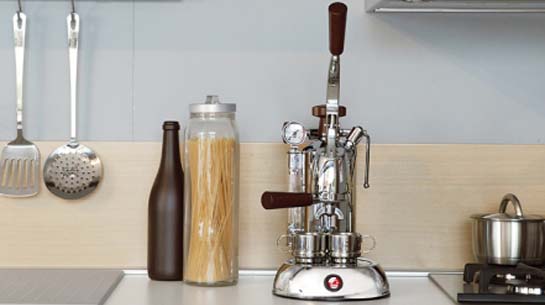 Rich, thick crema, the deep caramel-colored top layer of an espresso shot, is the mark of a properly brewed espresso. Only massive portafilters made of the proper material can produce genuine crema. The La Pavoni Stradivari Professional uses a chromed brass portafilter, which provides ample heat retention during. The massive 12 ounce porta-filter creates heaps of real crema with every brew. The Stradivari comes equipped with both a double and a single porta-filter basket.

The Stradivari comes with an automatic Dual Frother device. Just attach the frother to the end of the steam wand. A hose submersed in your milk container sucks milk directly through the line, steams it, then dispenses it directly into your cup. It's the perfect frothing companion for novices and professionals alike.The Stradivari Professional's 32 oz boiler is made out of premium triple plated corrosion-resistant chromed brass, for ultimate heat retention. There is no separate water reservoir in the Stradivari, so you actually add water directly into the boiler. Several minutes after powering on, the Stradivari's boiler is brought up to boiling temperature, enabling you to steam or brew immediately.

One of the most convenient features of the La Pavoni Stradivari Professional is its ability to start brewing immediately after it finishes steaming; or to start steaming right after brewing. After the boiler water is properly heated, there is plenty of pressure for performing any barista's task, like frothing or steaming milk. The all-metal steam wand lets you foam milk the traditional way, bringing milk to a rumbling frothy consistency in minutes. Once finished, close the steam valve and you are ready to begin brewing immediately.

WARNING: This product has Brass components. Brass alloys are known to contain trace amounts of Lead, which is known to the State of California to cause cancer and reproductive harm. For more information, go to www.P65Warnings.ca.gov.
UPC: 725182200573
User Manual

I got this to replace a previous La Pavoni machine that I had for 25 years. There is a learning curve with La Pavoni's but once you get the knack you can make consistently excellent espresso. This model is more heat-stable than my old one. Also, the milk steaming rod is easily removable for cleaning.