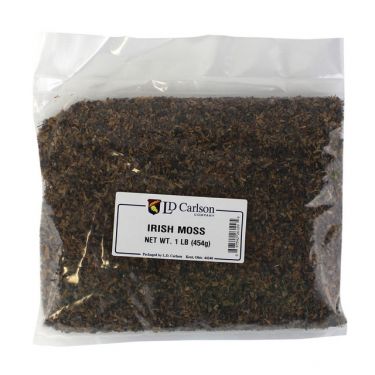 Irish Moss is a seaweed derived fining agent used by many brewers to help make a clear beer without the need for a filter, and to prevent chill haze. Irish Moss accelerates protein coagulation during the end of the boil which helps prevent chill haze. Many of our brewers use this product in every batch. Irish moss is a species of red algae that grows along the rocky parts of the Atlantic coast of Europe and North America. It is a major source of carrageenan, used as a thickener and stabilizer in processed foods like ice cream and processed meats. It is also used in homebrewing as a clarifer.

Recommended Usage
Add 1 teaspoon to the wort at the final 15 minutes of the boil. It works best when re-hydrated.

WARNING: This product has Brass components. Brass alloys are known to contain trace amounts of Lead, which is known to the State of California to cause cancer and reproductive harm. For more information, go to www.P65Warnings.ca.gov.