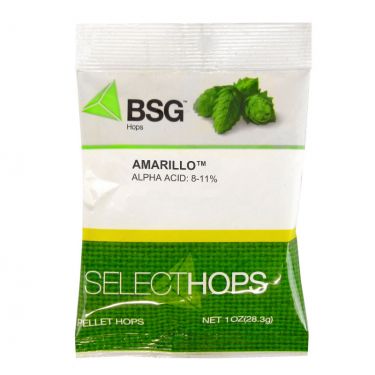 AMARILLO® brand varietal hops are exclusively managed by Virgil Gamache Farms of Toppenish, WA, where they were originally found growing wild in 1998. With respectable alpha acid content, AMARILLO® hops can be a dual-purpose hop and contribute to bittering additions, but with its unique, highly sought-after aromas and flavors combined with high demand, it's most often seen in late-kettle or whirlpool additions and as a dry hop. AMARILLO® hops are intense and pungent. They can contribute a renowned musty, dank quality much prized by those who love it. Amarillo® is a hop that has become super popular with microbrewers. Brewers are describing the flavor and aroma as a supercharged version of Cascade with floral, tropical, and citrus (lemon, orange, and grapefruit) characteristics.