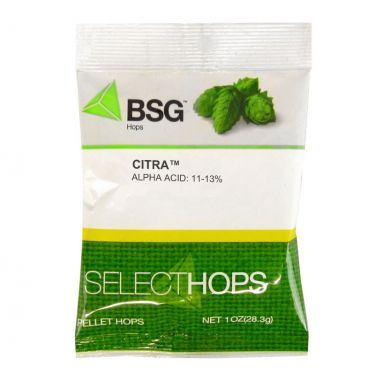 The Citra pellet is currently one of the most sought after hops among craft and home brewers for its intense citrus aroma and flavor. Citra is a relatively new variety, developed by the Hop Breeding Company of Yakima from Hallertau, Tettnang, Brewers Gold, and East Kent Golding parentage. It's character is strongly tropical and lush with a host of fruit flavors including peach, passionfruit, guava, lychee, lime and gooseberry. Because of its distinctive and intense aromatics, Citra is best in a late addition or dry hop capacity. Currently one of the top choices for late hop additions or dry hopping when you want to make that ultimate hop bomb. Used as a single variety or in a blend, Citra does well in American wheat beers, pale ales, IPAs Belgian-style ales, and has been known to complement Brettanomyces. Citra also has a fairly high alpha acid content making it a good choice for bittering IPAs, Pales, and American Ales.