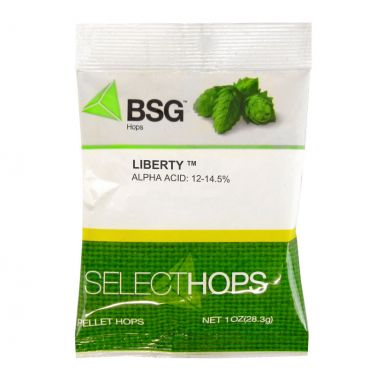 Liberty is a popular hop that was originally used just for bittering, but has now been widely accepted as a dual-purpose ingredient. Liberty came about in 1983 as part of the same USDA program that produced its half-sisters Crystal, Mt. Hood, and Ultra. It is a triploid daughter of Hallertau Mittelfruh and a downy mildew-resistant USDA male, #64035M, and of the four is considered to most closely resemble its mother. Designed as a substitute for Hallertau Mittelfruh, Liberty makes an excellent domestic stand-in for European noble hops in German pils, Bavarian-style lagers, Kolsch, Hefeweizen, Biere de Garde, and Belgian ales. Mild and refined, Liberty's aroma is spicy, sweet, grassy and haylike