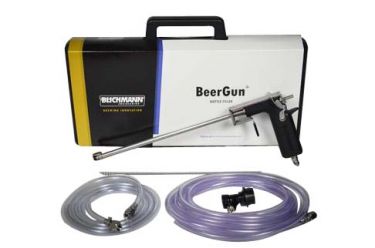 In 2005 Blichmann's BeerGun bottle filler revolutionized the way homebrewers bottled their kegged beer. Complicated counter-pressure fillers were obsoleted, and bottling became effortless and enjoyable! The patented BeerGunbottle filler became the overwhelmingly dominant filler of choice and we've helped tens of thousands of homebrewers bottle beer and win countless brewing awards. Blichmann has heard your feed back and has created a new BeerGun Bottle Filler - more ergonomic, faster and easier to clean, and even more intuitive!

You love the simplicity and convenience of kegging, but bottling for transportation is an annoying inconvenience. You either deal with complicated counter-pressure (CP) fillers or put up with the oxygenation and foaming of filling from a tap ... or you just give up on bottling altogether. In true Blichmann Engineering fashion, the BeerGun takes aim at all of those common problems and easily solves them with high-quality design, expert engineering and intuitive ease of use.

Powered by Quiescent Flow Technology, this revolutionary new bottle filler eliminates the complicated, time-consuming operation and cleaning of traditional CP bottle fillers used to fill bottles from kegs while maintaining their primary function - purging a bottle with CO2 (no oxygen pickup) and filling it with minimal foaming and carbonation loss. Couple that with the auto-fill level - and the ability to fill bottles of any depth without modification - and this filler is a clear standout. 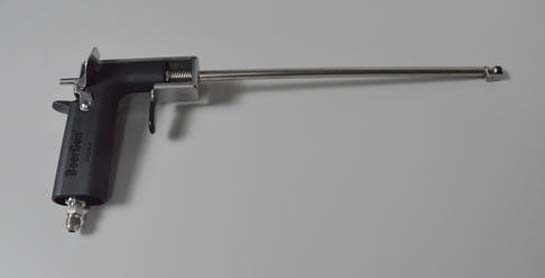 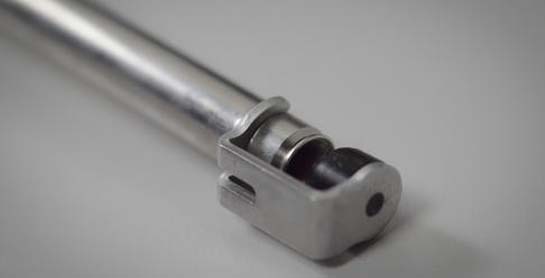 Quiescent Flow Technology is so different and so easy to use that it's another of our patented innovations! Blichmann's filler gradually reduces beer from keg pressure to atmospheric pressure with little turbulence, doing away with the complicated valving and cumbersome use of traditional CP filters. The result is a consistent bottle fill with little foaming and no oxygen pickup.

Foaming is caused predominantly by turbulence and sudden changes in pressure. The unique design of the BeerGun eliminates the need to pressurize the bottle by providing a non-throttling, quick-acting valve placed at the bottom of the filler stem and a beer-delivery system that is very low in turbulence. Competitors place their valve at the top of the filler, which forces the beer down an empty tube each time, kicking up foam along the way. Placing the valve at the bottom not only quickly immerses the valve in the beer but further reduces pressure change and turbulence, keeping the stem full of beer at all times. And because the beer is sealed in the filler stem when the BeerGun is removed from the bottle, it automatically provides a consistent bottle fill level.

These features, coupled with a CO2 jacketing tube for bottle purging and ergonomic valve actuators, makes filling bottles faster, intuitive, more accurate, and easier than ever! Because the BeerGun doesn't require a pressurizing stopper, you can fill a bottle of any depth without buying different stem lengths or adding plastic hose extensions. The BeerGun makes filling a bottle as simple as pushing a CO2 purge valve and pulling the trigger for beer!