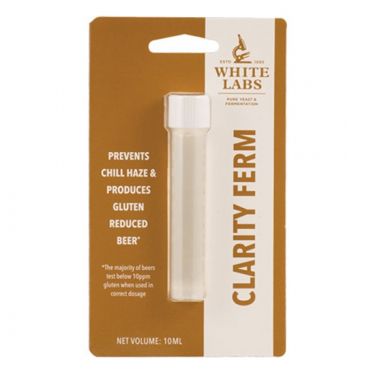 White Labs WLE4000 Clarity Ferm/Brewers Clarex was developed to increase the collodial stability of beer by reducing chill haze and produce gluten reduced beer in beers made from barley and wheat.

Chill haze in beer results from the precipitation of complexed polyphenols and proteins during cold storage. This haze develops over time and - initially - is reversible (haze disappears when the temperature of the beer increases). Eventually this chill haze can become permanent.

Clarity Ferm will prevent the precipitation of complex polyphenols and proteins by hydrolyzing the sensitive (haze-active) polypeptides in the region where such hydrogen bonding occurs. The specificity of the enzyme ensures that no other beer parameters are affected.

This easy-to-use enzyme can be used on all types of brewing materials and is a cost effective product to replace silica gel or PVPP. Simply add when pitching yeast, and Clarity Ferm will do its work during fermentation. When fermentation is complete, chill haze has already been addressed.

In addition to eliminating chill haze, Clarity Ferm significantly reduces the gluten content in beers made with barley and wheat. A Clarity-Ferm treated beer made with barley or wheat usually tests below 20 ppm of gluten, the current international standard for gluten free.