The cold brew coffee trend is taking over the industry and winning over the hearts of coffee lovers and non-coffee lovers, alike! With its well-rounded fruity notes and low acidity, it has become a popular coffee option but because of its special brewing method, coffee shops are charging a pretty penny for every cup.

While many coffee shops are picking up on this cold brew trend and started offering their coffee in 5-gallon kegs, you can easily make it yourself, giving you more control over the flavors and the finished result. Instead of breaking the bank to get your daily caffeine fix, brewing your own cold brew coffee means you won't waste time or money going on coffee runs.

If you run your own business, cold brew coffee dispensers are becoming increasingly popular in many workplaces because it offers immediate access to caffeine, limiting time wasted on brewing coffee, coffee runs, and overall lack of productivity. Providing cold brew coffee to offices has become increasingly easier and with how easy it is to brew, cold brew coffee is become a staple in breakrooms everywhere.

This process results in a brew that has some of the rounder, fruity notes that are not always noticed when brewed at high temperatures. Additionally, cold brew lacks the bitterness caused by mixing coffee grounds with hot water. Instead, the coffee comes out sweet and smooth, all while retaining the strength and caffeine of a traditional cup of coffee.

Another advantage of cold brew coffee is that it stays fresh for much longer than hot coffee, which goes stale as it cools down. With cold brew, you can have a keg on tap for a month without losing its flavor (not that it will last that long with everyone drinking it)!

Ready to get brewing? The brewing process is very easy and doesn't require a lot of fancy equipment. Cold brew recipes typically have a ratio of 1 cup of water for every 1/2 cup of coffee grounds. We prefer a slightly different ratio and method, which we've broken down step-by-step for you.

Here's what you'll need to make a big batch of cold brewed coffee: 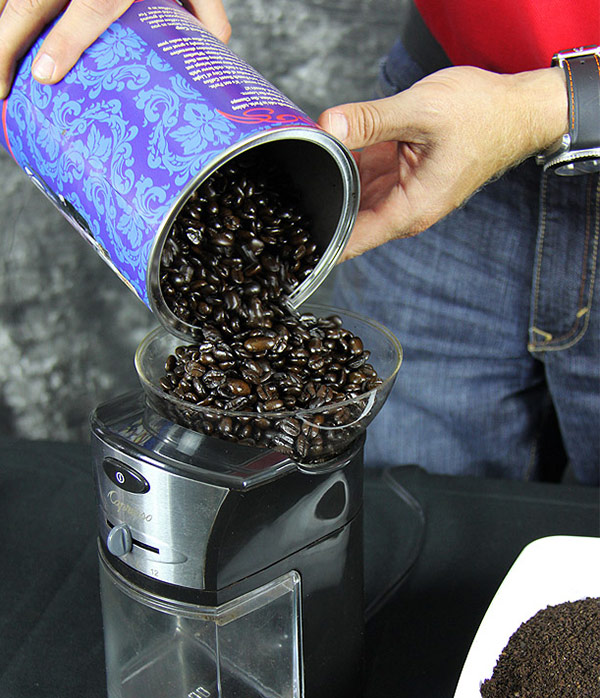 For cold brewing, you want a coarse grind on your coffee, the same type you would use for a French Press. We ground fresh beans in a Burr Grinder but you can also use pre-ground coffee. Since the volume of beans and grinds can vary, we recommend that you grind the beans first and then measure out the coffee for the recipe. 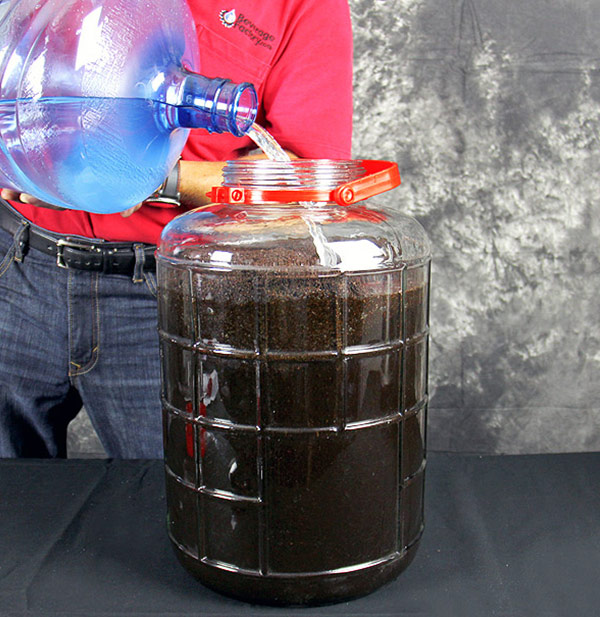 Add 15 cups of the coffee grounds to a large jar. We used the Kegco Wide Mouth Glass Carboy, which worked perfect for our needs as it allowed us to make a large batch but still have room to mix it all together and clean it out easily when done.

It has a 4.75 Gallon capacity and the top groove marks 4.25 Gallons, which allowed us to add the 68 cups of cold water and left room for the coffee grounds as well. Make sure to soak all of the grounds thoroughly. 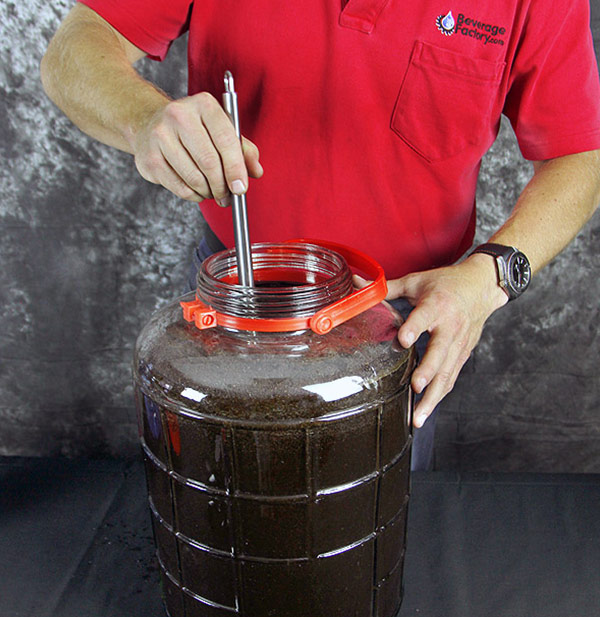 To make sure all the grounds are wet and submerged, use a long spoon to stir and mix your brew. We offer a selection of stirring spoons to suit this need. Replace the cap on the jar and let it brew.

It can be left on the counter at room temperature or it can brew in the fridge. Let it steep for 12 to 18 hours. There is no need for additional stirring at this point. Like drip coffee, the water will pass through the coffee ground and extract the flavors and aromas.


Step 4: Siphon or Strain into the Keg 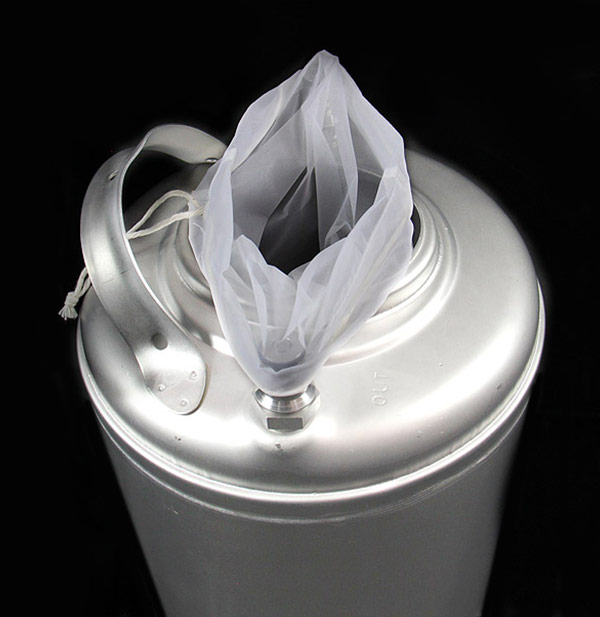 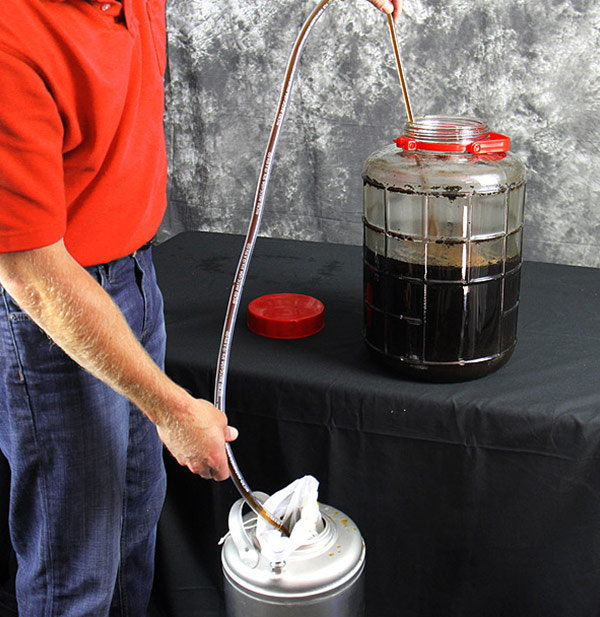 Next, you have to strain the coffee, which may seem like the trickiest part of the whole process but it's really pretty easy. You need to get the brewed coffee from the jar into the keg without any of the grounds. You can use a coffee filter, cheesecloth, or a fine-mesh sieve to pour the brew through.

We used a Nylon Hop Bag which easily covered the opening of the homebrew keg. If you're feeling strong and don't mind making a mess, you could just pour the contents of the jar through the hop bag and into the keg, but we used a 3/8" Auto Siphon to transfer half of the brew and then poured the last half after the majority of the weight was out of the jar.

The shoulder of the jar does a good job of trapping most of the grounds from coming out with the coffee and the hop bag caught the rest. It would be a good idea to have a bucket or trash can handy if you find that you need to empty the hop bag more than once. We didn't need to.

This mixture is considered cold brew concentrate, which will be strong and have a very intense flavor. Some people may want to dilute the coffee concentrate before drinking but we like it and feel that adding water will just make it taste like watered down coffee. Feel free to experiment with mixing in different syrups, kinds of milk, and creams to find the taste you like best. If you need some inspiration, check out our Top 5 Cold Brew Recipes.

Now that you have your cold brewed coffee in a keg, it's time to dispense it. Kegco has introduced the Javarator, a mobile, easy-to-use cold brew coffee dispenser that makes having iced coffee on tap at home or the office not only possible but affordable as well. The Javarator comes with all stainless steel draft components and is equipped with a nitrogen tank, ensuring that you get a smooth finished product.

Nitrogen is preferred over CO2 for serving coffee on tap because nitrogen is far less soluble than CO2. Any liquid that remains under pressure from CO2 for too long will eventually begin to carbonate, making the finished product fizzy and bubbly. Using nitrogen at low pressure will allow your coffee to remain as it was brewed and keep it fresh for up to a month because a pressurized keg does not allow oxygen to touch the coffee.

Just install your keg in the Javarator, hook it up to the dispensing system with the ball lock keg couplers that are provided, set the output pressure on the regulator to 3-6 PSI and pour yourself a glass! 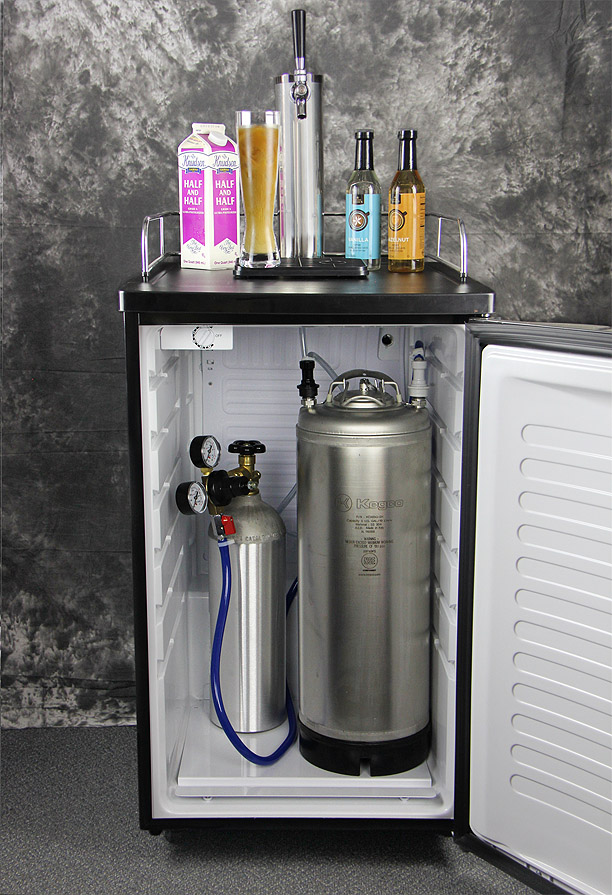 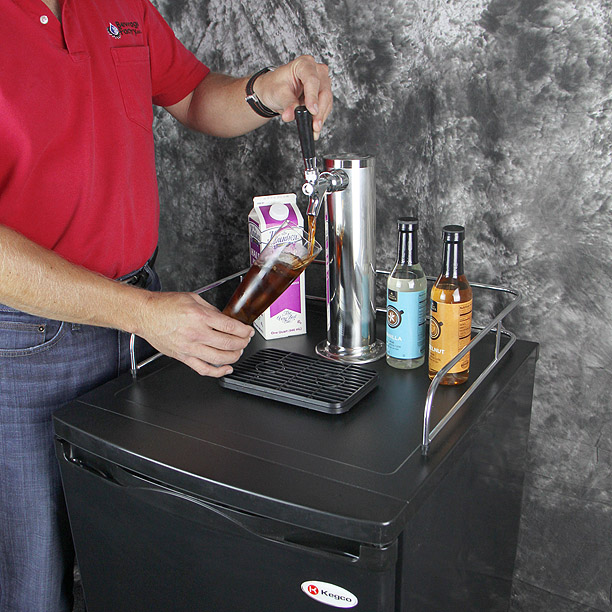