How to Tap a Keg with a Keg Pump


If you're having a party with a keg (or two) of your favorite beer and you need to tap it with a keg pump, here's everything you'll need to know to keep the keg flowing smoothly throughout the party.

Ideally, you want to give the keg a chance to settle before tapping it. The beer inside can become agitated on the drive home from the liquor store. Even if you drove 5 mph and slowly crept over any bumps, they may have wrestled it off a shelf and rolled it to the front counter before giving it to you. Letting it sit for a few hours before dispensing can help prevent a lot of foam.

While it's sitting, put it on ice and keep it cold throughout the party. Beer generally needs to be kept between 32-38° F in order to stay in its liquid form. If it gets any warmer, chances are nothing else you do will prevent it from dispensing a bunch of foam. Having it on ice before the party begins can help to ensure it's at the right temperature before you start dispensing.

Most people use a bucket of ice filled with ice to keep a keg cold. The drawbacks to this are that uneven temperatures throughout the keg can present problems and melt the ice quickly. A better option is to use an insulated keg bag which keeps the ice frozen longer and gives better coverage around the whole keg. Lay down a bed of ice before inserting the keg and pack as much ice around it as possible. You can't have too much ice. You may need to add more as the party goes on if you notice it melting quickly.

Make sure the lever on your keg pump is in the upright and unlocked position before applying it to the keg. If the lever is depressed when you install it, it will shoot beer all over you as you twist it into the keg. Insert the base of the keg pump into the lugs on the top of the keg and twist it clockwise about a quarter turn until it's snug. Pull out on the lever handle and push it down to tap the keg.

Note: Make sure you have the right style pump

Note: Make sure you have the right style pump for the keg you bought. A lot of people don't realize that kegs come in different styles depending on where they're from. Most North American beers (including Mexican and Canadian varieties) come in D System Kegs. European beers come in an assortment of styles, the most popular of which is the S System Keg. The S System pump looks very similar to the D System pump, but has a slightly larger probe. So if you use a D System pump on an S System keg, it won't tap the keg, even when the lever is depressed. Alternately, if you have an S System pump on a D System keg, it will spray beer all over when you try to tap the keg, even without the lever depressed.

If you're using a cooling bag, you can close the lid of the bag and open the zipper on top to install the pump. With the pump installed, close the zipper around the base of the pump to trap in cold.

Once the keg is tapped, open the faucet and see how it's pouring BEFORE pumping any air into it. The most common mistake people make is pumping too much and overpressurizing the keg. There is going to be foam in your first couple pours, so don't worry about that. What you're looking out for initially is flow rate.

The perfect pour should take about 6-8 seconds to fill a 16 oz. cup. If the flow is slow, start with about 4-5 pumps and check the flow rate. Then, if you haven't pumped enough, the beer will trickle out very slowly. If you pump too much, your beer will blast out pure foam. Usually, the only option to get the foam to die down is to pour beer until the pressure is reduced, although some pumps have a pressure relief valve that allows you to let out some air. A common mistake is pumping the keg before every pour. Only pump it when the flow rate has slowed, and then only enough to get the right flow rate.

When pouring, always open the faucet all the way so as not to restrict the flow.

Enjoy the beer from your properly configured keg pump!

Party pumps are great for parties and events where the keg will be finished in a matter of hours. Do not use a party pump to dispense beer that you plan on keeping around longer than that. A keg pump introduces oxygen into the keg, which causes a bacteria reaction that will make the beer go bad in 8-12 hours. If want the keg to last longer than a day, you should look into a CO2 dispense system. CO2 is an inert gas, so beer dispensed with it can last up to a few months. We have CO2 party pumps and beer dispensers that are a better choice for this type of use. 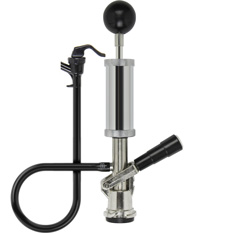