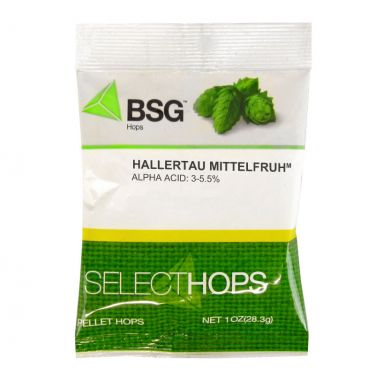 Hallertau Mittelfruh Hop Pellets can be and are used throughout the boil and it is most prized for its fine, elegant aroma and flavor contribution. The aroma is complex but mild and approachable. A mixture of sweet, earthy, and herbal with vivid impressions of new-mowed hay, sweet spices, dried flowers, and warm forest aromas (dry wood, humus). Its many offshoots and daughters show some of these same qualities, but none has the same range and balance as Mittelfruh. The signature land-race variety of the Hallertau region in Bavaria, Hallertau Mittelfuh is, at least to some, the epitome of noble hops. Mittelfruh has been one of Europe's most widely esteemed varieties for centuries and is practically synonymous with continental lagers (particularly Bavarian styles) and many types of German and Belgian ales.